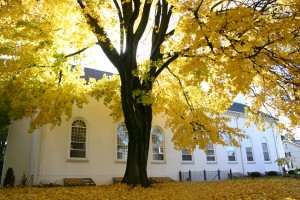 “Now here we build a village small; Toward its completion we give all.

Here, too, our hearts within shall flame–Emmaus, then shall be its name”!

-Hymn by Moravian Bishop Joseph Spangenberg April, 1761 for the name of the settlement.

The Moravian Church is a worldwide, Protestant denomination with roots that predate Luther (1457). It was founded in Moravia, now a part of the Czech Republic. Moravians have been serving Christ in the United States for over 250 years.

Native Americans called this area “Maguntsche” meaning “the feeding place of the bear.”  The first effort of the Moravians in this area was to establish a boarding school.  It was built in 1746, and was a place where Native American children were educated alongside European children.  A year later in  1747, The Moravian congregation was officially organized with a charter membership of 43 men and women.

The closed Moravian village was developed in 1758-59 on 102 acres of land donated by two of the early landholders, Jacob Ehrenhardt and Sebastian Knauss http://www.knausshomestead.org/.  The village was laid out with 32 house lots, 17 field lots, streets, woodlands, and sites for the church and school.  Initially referred to as Salzburg, or Salisbury, the village was eventually given the name Emmaus by Moravian Bishop Spangenberg  in 1761.  By 1829 the Emmaus population had only grown to 131, and due to both internal and external pressures, it became difficult for the community to remain closed to non-Moravians.  Many of the young people were marrying and moving outside of the community and the Moravians’ pacifist beliefs were becoming increasingly unpopular as the country was developing a sense of national pride.

Moravians continued to buy land in the village and worship in the church they had built in 1834.  Moravian church diaries point to 1835 as the year that home and land plots were sold to individuals outside of the church.  By 1859, Emmaus was organized into a borough of 200 acres with a population of 277, including Moravians, Lutherans, Reformed, and non–religious individuals.